In 1975, Peter Vogel had just finished highschool and was looking for something fun to do. His school-friend, Kim Ryrie, discovered a record called “Switched on Bach” which was recorded entirely using the Moog synthesiser. They thought this was really cool — electronic music obviously had great potential.

The record sleeve had a photo of the Moog synthesiser; rack after rack of electronic modules with hundreds of patchleads and knobs that all has to be set just right to make it happen.

Kim was very keen to develop a better synthesiser, and knowing Peter’s interest in electronics, he suggested they join forces to see if they could combine digital technology with music synthesis. A year or so later, they met Tony Furse, an engineer who was also working on cutting-edge digital music synthesis. Tony introduced them to a brand-new technology — microprocessors (the personal computer was still a decade away).

After four years of working around the clock, they had the first working prototype of what was to revolutionise the music industry.

Iconic hits such as ‘Sledgehammer’ by Peter Gabriel, ‘Thriller’ by Michael Jackson, ‘Rocket’ by Herbie Hancock and ‘The Unforgettable Fire’ by U2 are some examples of how the Fairlight CMI help defined the sound of the 80s. The first commercially-available albums to feature the CMI include Kate Bush’s ‘Never for Ever’ (1980), Stevie Wonder’s ‘Happy Birthday’ (1980), Jean-Michel Jarre’s Magnetic Fields (1981), and the Buggles’ last album, ‘Adventures in Modern Recording’. Peter Gabriel’s “Shock the Monkey” and its parent album Security (1982) also feature the instrument. 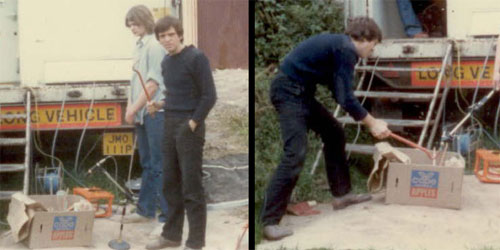 Peter Gabriel sampling the sound of smashing a bottle, circa 1980.

Stevie wonder and his CMI at Madison Square Garden

See these videos for a taste of Fairlight* in the ’80s.

In 2006 Fairlight.au donated a CMI keyboard to the human rights organisation “Witness” who auctioned it and raised $100,000. Why was it so valuable? The keys had been signed by some of the artists who had used it:

To commemorate the 30th anniversary of the sale of the first CMI systems, Peter Vogel Instruments Pty Ltd is producing a limited edition 30th Anniversary model, the CMI–30AX.

The original CMI was by necessity complex and bulky, with a correspondingly huge price tag. The CMI-30AX utilises the immense power of the latest field-programmable gate array (FPGA) technology. It not only faithfully reproduces the original sound but goes well beyond the original capabilities in a smaller, less expensive and more reliable physical form.

The 30AX looks and performs like the original CMI. The look and feel of the user interface is modelled on the original, with classic retro green on black graphics. A replica of the original music keyboard is part of the system, or you can use your own MIDI keyboard.

The software combines the very best of the early Series II and III, with a number of significant new features. Sound quality of 8-bit, 16-bit, or “best quality” 24-bit floating point are available and existing Fairlight users can import their entire sample libraries. Even better, sounds from any source, such as WAV files, can be imported and played with the classic CMI sound.

The CMI-30AX has four analogue and six digital outputs.

All the original sound libraries from both the Series IIX and the III CMIs are included, containing a huge selection of samples that made the CMI famous. We are presently negotiating with influential early users to include their libraries too.

These systems are built individually to order and are personally signed by Peter Vogel and Kim Ryrie. Deliveries started in the second half of 2011.

Ongoing software upgrades will be developed in response to suggestions from the CMI user community.

We are not planning to compete with the multitude of soft synths, samplers, and MIDI sequencers that are presently available. Those products generally do what they do extremely well and are the result of millions of dollars of R&D. The new CMIs are unique in that they produce the classic “Fairlight sound” (the sound that defined music of the eighties) as well as the modern sound of uncompromising signal purity.

Both these extremes are made possible by the extraordinary processing power of our FPGA engine, which outperforms audio software running on a conventional processor. We have yet to discover the limits of FPGAs at the heart of a musical instrument, but thanks to its massively parallel architecture, it can deliver hundreds of tracks of sample playback without degradation of audio quality with imperceivable latency.

Why not just resample the old Fairlight libraries?

Every now and then an attempt is made to recreate the classic CMI sound by sampling the old CMI libraries into a modern sampler. The results have been universally disappointing.

The reason for this is that the CMI’s unique sound was the result of the limitations of the technology of the eighties. A-D and D-A converters were very primitive by today’s standards — the 1979 model CMI used eight bit audio, and even the top-notch Series III used only 16 bits (which performed more like 14 bits in reality). The variable pitch of the sample playback was generated by very crude hardware which approximated the pitch but introduced significant artefacts. To compensate for the noise and distortion introduced into the samples, the CMI used analogue low-pass tracking filters. The “tracking” involved dynamically setting the cuttoff frequency to just above the note being played.

The end result was a complex set of colourations which made the CMI sound so distinctive. To make it even more interesting, because of the large amount of analogue circuitry involved, the sound of each channel was subtly different, and these differences were quite variable and unpredictable.

The first commemorative CMI produced by Peter Vogel Instruments, the CMI-30A, used digital processing to mimick the original CMI’s analogue sound. The new model, the CMI-30AX, uses FPGAs plus actual analogue filters to do this even more authentically. Thanks to this use of programmable hardware, each channel has its own “goodness” which gives the combined output the rich analogue CMI sound.

Owners of the CMI-30A will be offered the option to upgrade to 30AX at no charge.

*Fairlight is a trademark of Fairlight.au Pty Ltd and is used by Peter Vogel Instruments Pty Ltd under licence. There is otherwise no connection between the two companies.